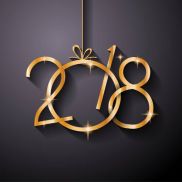 If we’ve learned anything in 2017, it is that we will be surprised. When we were talking with one former undersecretary of Defense for Policy, he observed that three months after he left his position, the top three issues for his successor hadn’t been on his agenda at all when he left. And we’ve also learned that surprises are as likely, perhaps more likely, to arise here in the United States than somewhere else on the globe. In those circumstances, predicting the future is a fool’s game, but let’s play. Here are not predictions, but rather things to watch for in 2018:

US Industry and Competitive Dynamics

In addition to several cups of New Year’s cheer as an antidote to these 2018 possibilities, some perspective is useful. Terrorism in the United States is frightening but, comparatively, not very lethal. Extremist Islamists killed 94 American between 2005 and 2015, and more than half of those were the work of the Orlando shooter who, despite his deathbed conversion to ISIL martyrdom, was more like the Las Vegas shooter, a sick killer, not a committed terrorist. While you wouldn’t know it from the media, by most accounts we are living in the most peaceful period the planet has known. Surely, deaths from major wars are down dramatically since the period after World War II. And while deaths in conflict seem to have ticked upward in the last several years, population growth means the numbers go up even if the rate of killing does not. In the worst of cases, surely Kim Jong-un must understand through the fog of idolatry that while having nukes may protect him and his regime, using them would be the end of both. And if all else fails to temper the grimness, tune to ESPN where they still hotly debate whether the era of football as America’s pastime is in over, and whether post-touchdown celebration deserves the equivalent of a Heisman now that the staid league finally has permitted a moment of fun for players and viewers.

Greg Treverton left the chairmanship of the National Intelligence Council in January 2017. He has written widely on strategy and intelligence, and served in government on the Hill and on the National Security Council staff. He is an SMA Executive Advisor.

Dave Patterson is SMA Senior Vice President for Strategic Accounts , and the former Principal Deputy Undersecretary of Defense, Comptroller in the Bush ’43 Administration.

Ajay Patel is President and CEO of SMA, Inc., and formerly Senior Partner at the Monitor Group for twelve years, where he created and led its global National Security practice.

John Prior is Vice President of SMA’s Management Consulting practice, and formerly Senior Director at Sonos, Inc., a Principal at Treacy & Company, and Associate Partner at Monitor Group.