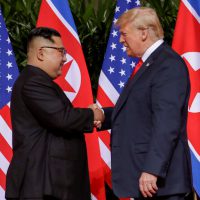 Not surprisingly, at a Seoul gathering of North Korea experts and intelligence chiefs from a dozen countries, topic number one was Kim Jong-un. What does he intend? Has he really made the decision to cash in his nuclear weapons for economic development and a place in global society? Or is this just another play for time, one we have seen so many times before? The answer, of course, is unknowable. It will become knowable only as negotiations play out, though we will have some indications early: is he prepared to make a big gesture, like ceasing enrichment, even if monitoring arrangements take some time to put in place.

The other big question from these discussions was China. Six months ago, China did what it had for a generation been unwilling to do, and put the screws on North Korea, all but cutting off trade. Was China following Kim’s opening, and in effect closing off a retreat? Or was it pushing? This answer we may never know, but the interactions between the two—three visits by Kim to China within weeks, after years with none—bespeak both China’s interest and perhaps its tutelage.

“Insanity is doing the same thing over and over again and expecting different results,” Einstein is usually credited with saying. Whoever said it, the line is a pretty good description of U.S. policy toward North Korea over the last fifteen years. Negotiating arrangements differed, but the same premises endured: if the United States and its partners could find just the right set of sanctions and enough pressure on China to enforce them, North Korea would bring its nuclear programs to the bargaining table. Again and again, that approach failed, and analysts drew two conclusions. Kim would never give up his nuclear weapons, and China would never put enough pressure on him to force him to.

The first conclusion rested on the power of examples for Kim: would Gaddafi and Saddam Hussein have been so easily toppled if they had retained nuclear weapons? In case he missed the point of nukes as in­surance, we continually underscored if for him by making clear that the only reason we cared about him or North Korea was nuclear weapons. China, in this conclusion, always feared instability on the Korean Peninsula more than North Korea’s nuclear weapons, and so would forebear from fully enforcing sanctions lest they destabilize Kim’s regime. What Washington saw as maximum pressure, Beijing regarded as too much risk.

If this time around is different, why? In approaching that question, looking at the last time nuclear negotiations with the North were successful is apt. In the Clinton administration, we looked hard at military options, and the target set was attractive, especially at the North’s Yongbyon nuclear complex. At that point is wasn’t clear that the North had any usable nuclear weapons. Yet even then we judged any military option too risky. With Seoul well within range of North Korean rockets, Pyongyang didn’t need nuclear weapons to devastate South Korea.

Reluctantly, we turned from sticks to carrots, offering in the Agreed Framework of 1994 to build two power reactors and supply interim fuel if the North agreed to freeze its plutonium production at Yong­byon, put it under international inspection, and stop construction of two other reactors. At the time, in government, I thought this was a wonderfully cynical act of statecraft of which we naïve Americans were hardly ever capable: we would offer them goodies, but the regime would collapse before we had to deliver. So much for my analysis! Counting on regime change is one mistake I won’t make again (though Kim Jong-un’s two favorite pastimes seem drinking and driving, so he may manage regime change on his own!)

The Agreed Framework had its critics, to be sure, but it is a reminder for an America that is a little sanctions-happy that carrots can be valuable. Only time will tell whether real negotiations will ensure and whether Kim will agree to meaningful limits on his nuclear program, let alone abolition. But if anything is different this time, the national again turned toward carrots. With few pre-conditions, Mr. Trump gave Kim what he seems to want more than almost anything—recognition as an equal by the United States on the world stage. And there is the prospect of much more—ranging from sanctions relief to aid, trade and investment—depending on how the negotiations go. Kim may blow the opportunity, but this time around he has incentives he didn’t have before.

Greg Treverton stepped down as Chair of the US National Intelligence Council in January 2017. He is Professor of the Practice of International Relations at the University of Southern California, and an SMA Executive Advisor. He was recently named one of “The Most Influential People in Security 2017” by Security Magazine.

You can download this article as a PDF: Learning Lessons from the North Korea Case File Downloads :244